I took (or planned to take) part in these sessions among the various and interesting others. I tell their summary and my impression only for ones I could watch without sleeping.
(I feel regret and sorry but I sufferred from jet lag…)

Besides sessions about functional programming, we enjoyed hiking in LambdaConf 2015!

As the photos above show, Boulder is surrounded mountains. I saw beautiful mountains from everywhere. Then of cource it’s near from hiking trails. So we hiked there with the leader of LambdaConf, John.

And as LambdaConf 2015’s intro says, people in Boulder held a festival around the downtown. It seems John intentionally scheduled LambdaConf 2015 for those days, to make us have fun with Boulder more!
I think it’s really nice idea, I found and felt John’s love toward Boulder strongly.

And in the festival, I played bungee-jumping without string for the first time from there! 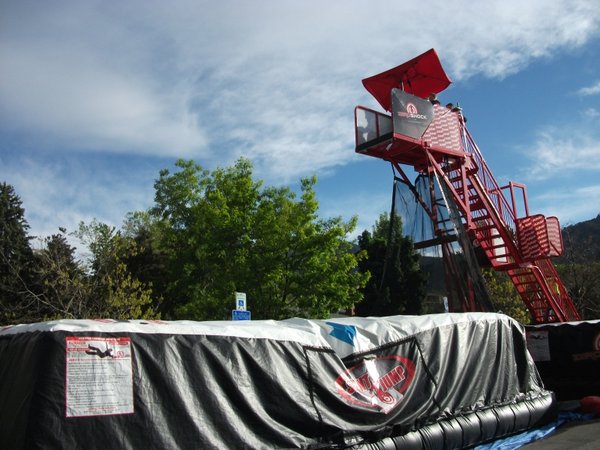 I did want to give some lightning talks in LambdaConf 2015, but I missed the chance in the unconference.
I wanted to show my opinion about Monad, as well as to introduce apiary.

So let me publish one set of the slides:

Monad as “Things to Do”

Of cource I uploaded onto Slideshare:

I’ll publish the one about apiary if I remember to complete :)

Finally, I want to say thank you to many people who guided me to this fantastic conference.
Including people who held, gave sessions, attended with me, accommodated me or any others!